What does CSS stand for?

CSS stands for Cascading Style Sheets. You can actually learn a lot about CSS just by understanding the meaning of those three words.

As you know, in HTML you’re writing what will be on the page.

Need a paragraph? Add it to your HTML document.

Need an image? Yep, add it to your HTML document.

CSS, on the other hand, determines how your content will look. This is what style is referring to in Cascading Style Sheets.

That paragraph in your HTML document, the CSS can change the color, size, alignment, and so much more.

The CSS can also style the image - should it have rounded corners, have a shadow under the image. If you hover over the image should it move or have a border or maybe a shadow?

And this is just scratching the surface, but you get the idea.

Here is the CSS Academy home page without CSS (only HTML):

You can see that in this image you get all the information, the what of the page. Here’s the exact same page with CSS: 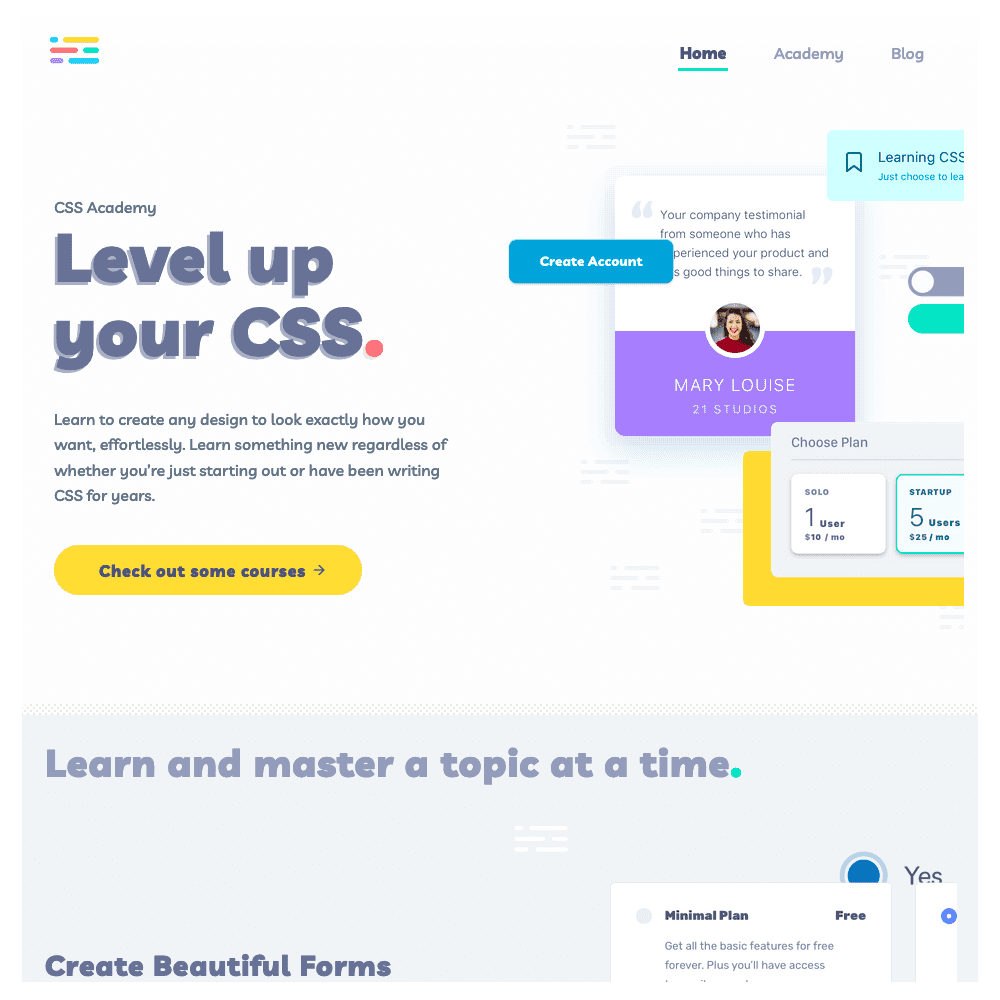 In this image you can see how the CSS transforms the page.

Have you ever written CSS only to find that it isn't showing up on the page?

One of the reasons this happens is due to the cascading nature of CSS. This is a crucial thing to understand about CSS.

If two styles conflict the style lower down on the stylesheet will override the styles higher up.

The styles cascade as if water flowing down a waterfall.

You could picture it as if you were starting at the first line of the stylesheet and as you go down you grab styles.

Let’s say you found a style for the font size of a paragraph at the top of the waterfall (aka the top of your stylesheet 😉).

Lower down you find another style that makes the paragraph much larger. What happens? Which font size will show up?

Due to the cascading nature of CSS, the larger font size lower down in the stylesheet is the one that will be used on the page.

CSS will, in essence, drops the style at the top of the waterfall and accepts the one lower down. It never goes back up, it only goes down.

Let’s say you have a paragraph. And you have these two styles:

What color will the paragraph be?

You got it. Blue.

If this is still confusing, the reason that it is blue is because the styles cascade. So, if a style lower down conflicts with one higher up it will override the style that was declared higher up in the stylesheet.

Just remember, keeping all things equal, styles lower down will override styles higher up in the stylesheet.

The sheet is referring to where the CSS styles are written. Typically this is a separate stylesheet. But, not always.

There are a few places where you can add your CSS:

Let me walk you through each of these and explain the benefits and limitations of each one.

As you’re writing your html you may be tempted to add styles right there with your content. Let’s say you have a paragraph that you’ve just added to your HTML document:

And you decide you need that paragraph to be centered on the page. So, you decide to do something like this:

This is adding styles inline.

The Benefits of Inline Styling

It's quick and easy to add inline styles right there in your HTML document.

If you don't have a lot of styles, this may seem like the easiest way to go.

The Limitations of Inline Styles

Typically it only takes a few pages and some changes for you to realize the limitations in this strategy.

Here are the 4 main problems as I see them with inline styling:

Adding Styles on Page (in the Head)

You also have the option of adding a <style> tag inside the <head> of your HTML document. In-between the style tags you would write your CSS just as you normally would like this:

Do you see how in-between those two <style> tags normal CSS is written?

You can think of that kind of like a mini stylesheet - and only for this page.

Benefits of on Page Styles

Similar to inline, the styles are closely tied to the HTML.

If you want to change a style on a specific page, just go to that page's HTML document and you can change it right there.

If you don't have a lot of styles, this may seem like a great way to go.

Limitations of on Page Styles

You may have some styles that you want to extend across all pages. Maybe you want all paragraph's to have a certain font family.

With this stategy you would have to re-write the font family for the paragraph for each page.

This would result in a lot of repetitious styles.

Adding Styles in a Separate Stylesheet

That leads us to writing your styles in a separate style sheet. This is the generally recommended way of writing CSS. Your HTML document might look something like this:

Notice in the head of your document there is a link tag. Let's fully understand the attributes of this tag and what's going on here.

The first attribute and value is rel="stylesheet". This is actually a required attribute for the link tag.

It is required because it’s explaining the relationship between your current HTML document and the linked document.

In this case, it’s a stylesheet that you’re linking together.

The type="text/css" is clarifying what media type the browser should look for in order to read it correctly.

The href="styles.css" is indicating where the document exists inside your project. This suggests it’s in the same directory as your HTML document.

So, why is this the generally recommended way of doing things?

Well, there are a few reasons:

The biggest limitation of separate stylesheets is that it's not as closely tied to the HTML document as both inline and on page styles are.

The styles for a given HTML document may be broken up into more than 10 or 20 different stylesheets (depending on your stylesheet organization).

Although this has its benefits, it also leads to a few problems:

Another issue with this approach relates to the cascading nature of CSS. Sometimes the styles across different stylesheets override each other unexpectedly. This can be rather frustrating when working on large projects.

You can usually avoid this problem completely by following a naming convention like BEM (my personal favorite), OOCSS, or SMACSS.

This also means you need to learn an effective way of naming your CSS classes.

Another newer option for placing your CSS, is right inside your JavaScript component.

As JavaScript has evolved, many frameworks like React, Angular, and Vue use components as their building blocks.

If you're not familiar with what a component is, imagine your website or web application broken down into groups.

For instance, one group might be the navigation links used to navigate the site. These links are built inside a component. These components are then put together to create pages.

The beauty of this approach is that you only need to create a component once and then you can reuse it in any context within your project.

If you have a button component, for example, you only need to build it once and then place it on any page you might need a button.

CSS-in-JS is a way of writing your CSS inside the component and not in an external stylesheet.

It's a rather controversial approach to writing CSS with some designers/developers strongly for it and some strongly opposed.

There are a number of big benefits to this approach:

There are also a few limitations: